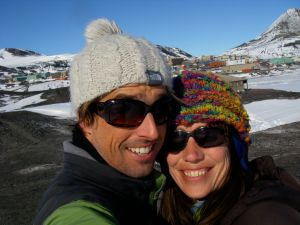 Joolee and I had been dating for just a few months, all of them in McMurdo, when we rented a double kayak to explore the outer islands of Fiji, which means the trip was double-jinxed from the start. First, as any novice kayak guide will tell you, a double kayak is known as a divorce-boat for a reason: with one person at the rudder all day, these watercraft have a way of forcing the issue. Second, “ice” relationships, born at research stations in the Antarctic, typically have the same longevity in higher latitudes as your average iceberg. 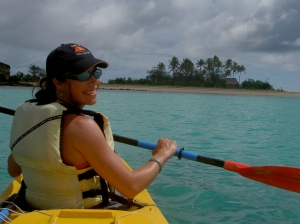 So there we were, about day three, halfway through my first major open ocean kayak crossing, our boat steadily riding the heaving backs of the long, even swells. At each peak, we could see the distant summit of the island that was our target, still two miles out. Then we slid into the trough and all we saw was wave. A few degrees on either side of our goal lay 800 miles of blue water untill the Solomons.

Was I scared? Let’s just say I was quietly enumerating the many ways that this endeavor could go wrong. Was our sagging, plastic boat seaworthy? We had no locator beacon. The Aussie guide, who we’d paid dearly for the priviledge of taking this boat out without his guide service, told us the beacon was useless. It alerted someone back in Canberra. “It’ll be days before they organize a rescue,” he insisted as he tossed a few dubious looking flares in the cockpit. “Better off signalling a passing vessel with one of these, mate,” he said, his Aussie accent lending an air of confident ease to his plan.

But I hadn’t seen another vessel all morning. I tried not to think of Captain Bligh, who traversed these waters in an open boat after the crew of the Bounty cut him and a couple of officers loose.

And then there was the girl in the front of the boat with me. This was our first experience outside the microcosm of McMurdo. I was smitten, of course. She owned a motorcycle in South Africa and a kayak in Alaska, walked 3000 miles at  a go, and had climbed the highest peak in the Andes. I’d somehow convinced her I was cool enough to travel with her. But what business did I have bluewater kayaking? My passion is skiing; I’d never kayaked much. All I wanted from this kayak trip was to be found worthy of hanging on this chick’s coat tails.

So how was I doing so far? Unfortunately, the day before, I’d damaged my credibility: with her at the helm I voiced my fears about her route choice. I’d invoked my credentials as a Californian to quibble with her line through a reef–it was shallow and breakers seemed to come irregularly from several directions.

Relaxing in the bure after a day of paddling

She swept aside my wheedling, pointed us at the beach, and asked if I intended to help get the boat across the reef. Needless to say she performed a tactically perfect surf landing before we camped under the stars of the south Pacific.

And today on the crossing she had become quiet. Not a good sign. Was she up there regretting her choice of travel partner? My keen attempts to kindle some conversation went nowhere. I got no notice when I noted the name of a passing sea bird. She’s over me, I thought. Give it to the next resort and I’m done. I imagined the mute ferry ride back to Nady and the gossip in the Antarctic when they heard another ice couple imploded two weeks out of Christchurch.

Then Joolee eased up her pace. “Everything Okay?” I asked. “No,” was the only reply. Was she going to deliver some pronouncement? Tell me off?  My seat directly behind her allowed perfect perspective on the tilt of her head. Yep. She definitely had something to say.

She set her paddle on the coaming and began to turn. Then she wretched over the side of the boat. I raised my paddle to allow her lunch to glide past. It turned out the entire morning she’d been engaged in a mental struggle to deny that she was seasick.

The resort on the other side of our crossing had both cold beer and hot showers, which made it an oasis within the great paradise that was our playground on that trip. I have since convinced her that seasickness is not a matter of failed willpower and that dramamine does what it says it does. We’ve also undertaken many more trips to indulge our wanderlust, including skiing hut to hut through the Alps, from Chamonix, France to Zermatt, Switzerland on her 40th.

9 comments on “Fiji by double kayak”

This entry was posted on April 6, 2012 by billjirsa in stories.