by Cathy and Neal Lurie

More than four years ago I met Joolee for the first time.

Our dear friend Bill told us that he had met someone very special through the Antarctica program and that they were going to be coming through Boulder, so we would have an opportunity to meet her.

We picked Bill and Joolee up at the Bus station in downtown Boulder and the first thing I remember about Joolee was her effervescent smile and her extremely heavy backpack.  Trying to impress her, I said I would take her backpack and place it in the trunk of the car.  With one hand Joolee handed me her backpack and I immediately lost my grip of what must have been a 50+ lb backpack.  I gasped and asked her, “what was in this thing?” Me, feeling some loss of pride; she said, in a meek tone that her collapsible kayak was in the backpack, so it was a bit heavy.  Two hands and all my bodyweight would never have been able to heave this thing in our car, yet Joolee simply picked it up with one hand and placed it gently in the trunk.  My first thought was that she had not only a great smile, but was crazy fit and I knew she had some stories to share from that backpack.

I liked her from the start.

Once we got back to our place, Neal and I couldn’t hear enough about their adventures together.  Kayaking in the oceans around Fiji, their amazing experiences and interesting adventures in Antarctica and then there was the new-shared skill – the ukulele.  Bill always had a knack for picking up an instrument and learning how to play it with what seemed to be little to no effort.  We found that Joolee had this quality too as they serenaded us with a few new songs they had been practicing.  While I had never ceased to be in awe at Bill’s many talents, I found that equally true of Joolee as well.

Over the years we have had some great adventures with Bill and Joolee and my admiration and love for Joolee grows at every encounter and with every hike to a hut or through the wilderness.

Joolee’s modesty reminds me of a Christmas tree filled underneath with many wrapped presents in which the unwrapping of each gift gives you a beautiful surprise and a new sense of inspiration.  Unlike most people, Joolee doesn’t readily tell one all the many adventures she has experienced or the numerous insights she has gained in her 40 short years on this earth, but if you are so lucky to learn what she has to share, it is the greatest gift.

She has hiked across Australia, motorcycled across Southern Africa, hiked the Appalachian trail, kayaked across the mighty rivers in South America and has ascended endless peaks around the world.  Many of the adventures she has done on her own, before she met Bill.

And now there are two. 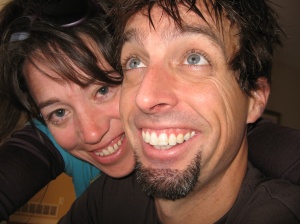 When Bill met Joolee I can only say that not only is he lucky, but we are luckier still.  My friendship with Joolee has taught me that women can do anything and that we have the ability to be strong, independent and respected.  It seems silly perhaps to say such a thing in 2012, but I often feel that there are many political ideologues who want to push back the clock on our gender, while women like Joolee only prove women are only limited by imagination and fears.

Happy Birthday Joolee!  As you turn 40, please know that words can’t express how grateful we are to have you in our lives and as a dear friend.  Though it can be many months before we see or hear from you and Bill, I cherish that we pick up where we left off, and get the bonus of the many months of adventure you and Bill share together that equal another’s lifetime.

You live life to the fullest and the world is a much better place because of your example.

This entry was posted on March 15, 2012 by billjirsa in stories.